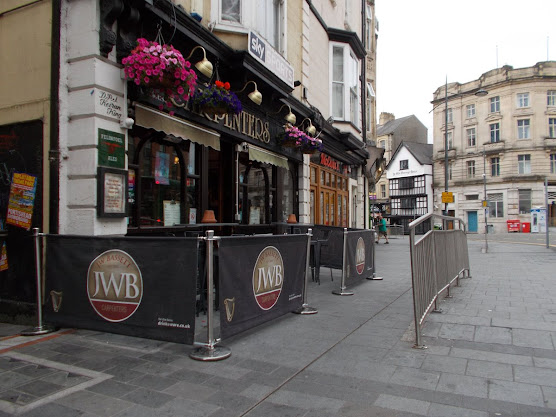 Two grandees of Newport High Street - the Carpenters and the Murenger - keep a respectful distance from each other at all times
Known under various names throughout its life, the Carpenters sits right at the top of Newport's High Street, opposite the site of the old Post Office and five minutes from the railway station. Supposedly dating from 1405, which would make it older than the Murenger just around the corner, the Carpenters is part of a cluster of venues which includes McCann's rock bar and Le Pub / Le Public Space.
Owned and operated by the JW Basset pub group, which comprises an estate of five pubs in the south Wales area - including the Pen & Wig five minutes away on Stow Hill - as well as one in Bristol.
This mini-empire isn't just another Spoons knockoff though. These are genuine, well appointed and well run pubs. And I'm not just saying that because a member of my family is a pub manager elsewhere in the estate. The Queen's Vaults in Cardiff for example has long been a great destination for watching live sport, drinking good beer and shooting some pool.
While its bigger cousin in Cardiff may have three pool tables, the Carpenters has to make do with one, intriguingly placed on a mezzanine level up some steps to the rear. But it does also have a table tennis table and a piano, features not found in many pubs nowadays.
At the bar there is the usual macro fayre which is perfectly suitable for the clientele who frequent this not-at-all atypical city centre boozer. However, nestled inbetween the bright lights and the glossy chrome of the keg lines sit three inocuous cask pumps. Nearly 70 miles west of its homeland, in the middle of T*ny R*bel Town, you can get beautifully served Felinfoel Ales - usually Double Dragon, Dragon's Heart and IPA. 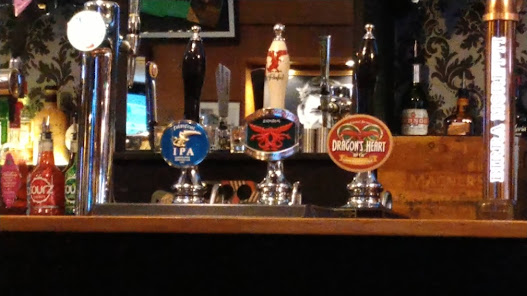 West is best....even here in the East 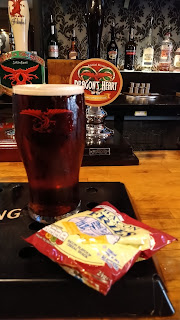 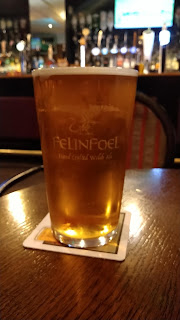 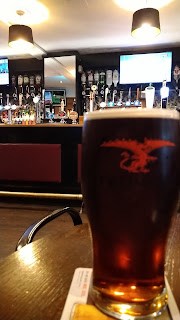 This is another great venue for sport too, with screens dotted around the walls showing up to two events at once. There's also a jukebox although its popularity may mean waiting a while for your tune.
Sometimes the best way to do things is the simplest way. There is nothing unnecessary or extraneous about the Carpenters. Beer, sport, music, multicoloured balls. Why complicate things?
Bonus: Newport based beer blogger Arfur Daley wrote a profile piece for Wales Online back in 2011 - some of the details are now out of date but it's still worth a read
https://www.walesonline.co.uk/lifestyle/showbiz/arfur-daley-beer-hunter-1826739