Venue to Visit : The Old Arcade 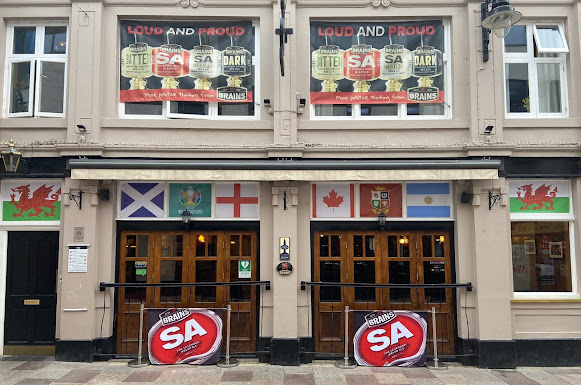 The theatre of dreams (Pic from Old Arcade twitter feed)
Pubs, as we know, serve a variety of purposes and each one has a dominant character. You've got your music pubs, your ale pubs, your quiet chatty pubs and any number of themed bars.
And then you've got sports pubs. And we're not talking those lame-ass locations that just stick a neon sign and a few posters of the 1993 Cincinatti Bengals on the wall. If you're going to do it, do it properly.
The Old Arcade is the exemplar in how to do it properly.
Ostensibly this is one of a number of Cardiff's city centre Brains outlets which, unsusprisingly, serves Brains (and now Marstons') beer and serves good, freshly cooked pub grub. All good so far. But then that could be said of so many places within a stone's throw of St David's Hall. What makes this place stand out?
You will see the second you cross the threshold, whether it's through the front door or by entering via the literal old arcade to the right hand side. Your eyes are immediately drawn to the walls and the ceilings. As you wander around trying very hard not to bump into anyone - the place is always well frequented - it will be hard to avert your gaze from the multitude of memorabilia that bedeck the bevelled beams and boards that surround you. 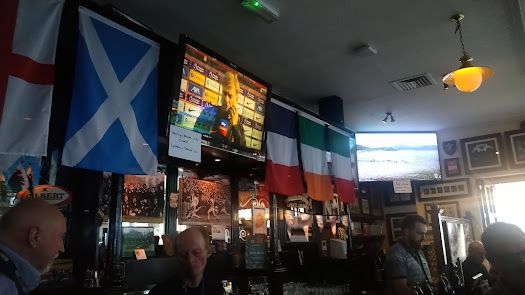 Six Nations striped synchronicity
This place is a museum, literally. Old rugby balls. Rugby shirts. Newspaper front pages. Old match programmes. Photographs. More commemorative pennants than Yankee Stadium.
The Old Arcade is a monument to the game with the odd-shaped ball. It is a celebration in pub form of rugby's players and of the nations and clubs that have played it over the past 150 years. Every great day in Welsh rugby can be found here somewhere, and some of its darker ones too. 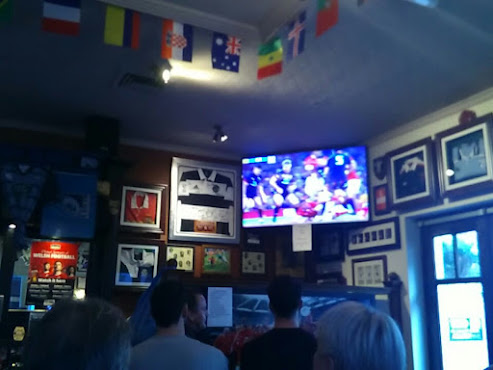 Yesterday and today framed side by side
As you'd expect, it's a great place to watch the current generations of stars ply their trade too. Multiple screens are scattered throughout both the front and back bars, as well as the little snug/conservatory at the back. Three separate events can be seen at one time, which is useful on a Saturday afternoon when horse racing, soccer and rugby all compete for the attention of the clientele.
One of my favourite days was the first weekend of Rugby World Cup 2019, which was being played in Japan, so the games were all on in the morning. Open bright and early on Saturday morning, 8:00am, for France v Argentina and New Zealand v South Africa. Licensing law meant only soft and hot drinks could be served initially, although as soon as the clock ticked over, the Rising Sun, Bitter, Dark and - of course - the SA were flowing. 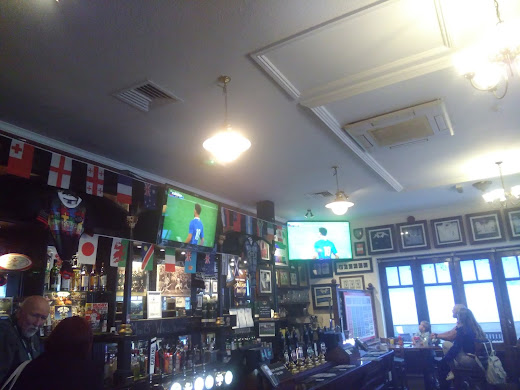 Such is the Old Arcade's reputation that visitors from all over the world know of it, and make a beeline for it for big sporting occasions - both home and away. On this occasion a young French family had come to watch Les Bleus take on the Pumas. Their young lad had brought a rugby ball and, far from discouraging him from playing with it, Uncle Bob, the ever-present and larger than life grandee, came out from behind the bar and suddenly the back room temporarily became the Stade De France.
One kick to win the game. Everyone hushed. 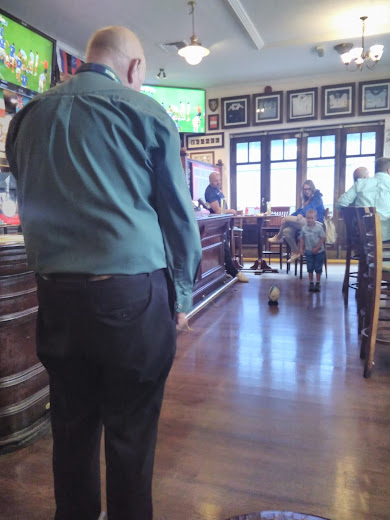 You wouldn't get that in Wetherspoons.
Nor would you get perfectly poured Guinness, or superbly served SA Gold. You wouldn't get the warm enthusiastic greeting from Mark, the landlord, who treats you like a friend who's been coming to the pub all their life, even if you are, like me, a more recent patron. 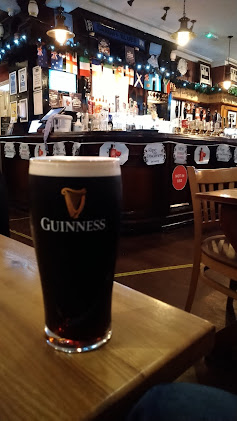 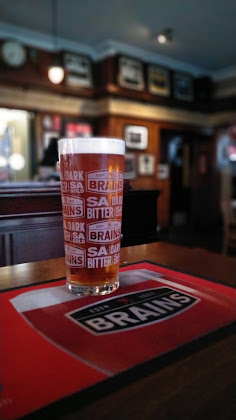 You certainly wouldn't get the opportunity to pose with the World Cup in a Sweden shirt on the day England won 2-0. 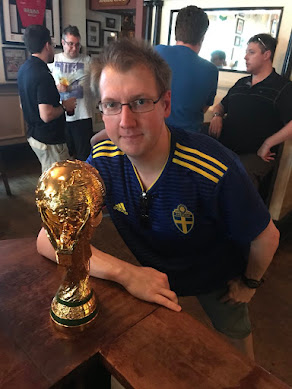 Better luck in 2022 (pic from Old Arcade Twitter)
The Old Arcade is a must for anyone who likes pubs, sport, sports pubs, and sports history. It's a must for anyone who wants to try good, real Brains beer as it's meant to be served. Its popularity and posterity means it can get very busy on rugby matchdays, so be prepared to stand in one of its many corners and rub shoulders with fans from all over Wales, and from all over the world.
And when the match is done, pop on back for last orders and, as you dive into a freshly poured pint of cask Bitter, take a moment to experience the very unique Cardiffian pleasure that is Ponty Presly belting out You Were Always On My Mind.
Because, once you've visited once, this living breathing monument will certainly always be on yours.
Website: https://www.sabrainpubs.com/pubs-and-hotels/south-wales/cardiff/old-arcade
Twitter: @theoldarcade
For more on the history of the Old Arcade, I recommend this excellent article from Wales Online