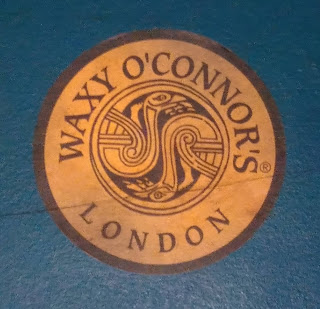 A few years ago I was taken on a pub crawl of London by a mate who lives in Reading. It's where I first discovered the Harp (Day 2) and [[SPOILERS]] (Day 31).
As we arrived in Leicester Square and stood adjacent to the ridiculous tourist-grabbing hellhole that is The M&M store, he said "OK, your mission, should you choose to accept it, is to find our next venue, Waxy O'Connor's."
Look left? Pret. Look right? The Swiss Court. Look straight ahead? Chinatown.
And then the most inocuous of round signs caught my eye. There wasn't a grand entrance to this place, certainly not on Wardour Street. A little red door, slotted inbetween various Asian restaurants and shops. 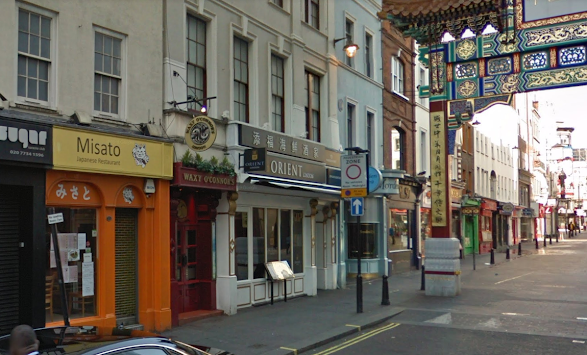 /
Blink and you'll miss it
In we went.
And down.
And down......
Until we pushed open a heavy wood-and-glass door to see a pub like no other. Wooden beams, brick walls, stairs everywhere leading to little quiet dark drinking cubby holes. A huge bar spread out before you on the main floor of the building. Bright lights hanging from chandeliers making little sparkly reflections off every piece of cut stained glass and exposed metal.
Four bars are spread out over six levels. It's a Crystal Maze zone, a live Hogwarts and Queen video all in one.

And the buzz. One hell of a buzz. Every Irish person in London seemed to be in here. 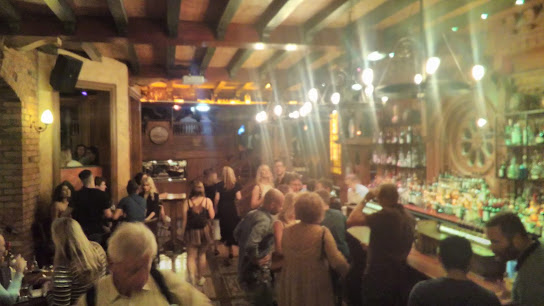 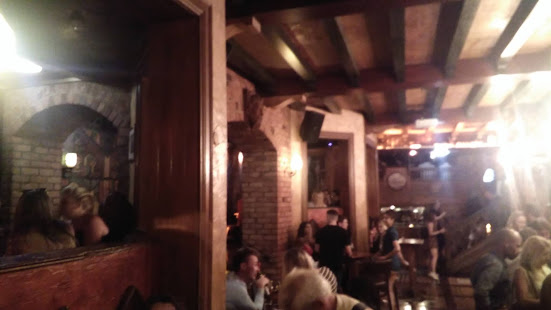 Such a shame that my phone had such a sh*tty camera in those days
Waxy's (and its delightfully named, slightly more conventional overspill pub across the road "Waxy's Little Sister") are owned and operated by the Foundation Group's Glendola Leisure, a Middlesex company who run bars, coffee shops, restaurants and hotels across the UK. Waxy's has a cousin in Glasgow and, up until the pandemic, there was also one in Manchester.
On the bar is the usual big-venue fayre, albeit illustrated by some exquisite bespoke custom pump lenses. They have their own branded barmats too.
Of course Guinness is on, and Murphy's, and my go to, the delightfully sharp Franciscan Well's Rebel Red which, although claiming to be from Cork, is a Molson Coors brand. Such is life. 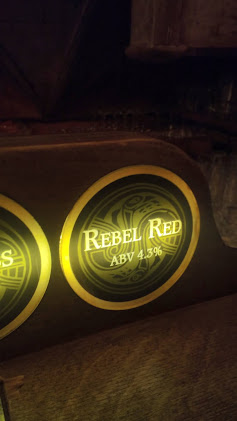 I believe this was £6.50 a pint
I visited many times since then - including a memorable Six Nations Super Saturday when we literally turned up at opening time - almost banging down the door to be let in! - and watched two matches back to back, surrounded by several folk wearing every shade of rugby shirt. Being a big session we ate as well as drank on that occasion; the food was excellent - I had a sausage roll so thick it could have been a soccer player.
On another occasion there was live GAA football on the big screen and this time the shirts that surrounded us were those of the Irish counties. We sat near one folorn Wexford supporter, who was less interested in the fact I'd visited Gorey mere months before than he was in his team getting pasted.
Waxy's is always on my tick-list of go-to venues in London if only for its uniqueness. I have never been anywhere else like it - yet.