Let me quickly preface this by saying this vignette is about the city centre pub which has recently had a change - or should that be reversion - of name; and not the other pub out in St Mellon's which used to be called The Blue Bell, and before that The Bluebell Inn but which is now called the Coach House. Got that? Cool. Picture from Blue Bell Facebook page
Dating from 1813, the Blue Bell is a recent acquisition by the company that also runs Cardiff's Brewhouse bar, Retro nightclub and another ancient classic venue, the Philharmonic - the latter being rescued from lying dormant and abandoned for the best part of a decade before it was royally scrubbed up to become the overly majestic hotspot it is today. 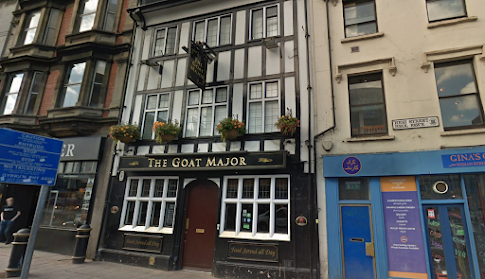 Regiment....dis...missed!
At the point that the pandemic hit, the pub was called the Goat Major, a nice but pretty run of the mill Brains outlet. Given the military moniker in 1995 after the mascot of the Royal Welsh infantry regiment, it always felt to me like the poor relation in a city with such iconic Brains pubs as the Old Arcade, City Arms and Cottage; despite being in no less a convenient place for tourism and rugby.
As the Brains/Marstons saga unfolded, the Goat was one of the first casualties but the opportunity was taken by its new owners. With a new gaffer came a new - or is that old - name, with the erstwhile epithet making a return. 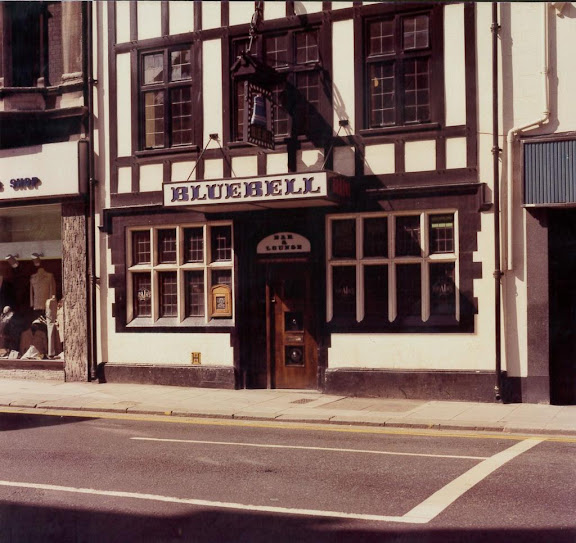 Back to the future
Me being the cultural philistine I was, I didn't realise this, and thought that a brand new pub had opened up. It took me a while to join the dots.
After a much needed but sensitive internal refurbishment and with the Brains casks swapped out for some from another Welsh brewery - Glamorgan - suddenly this old timer felt young and refreshed again. It's an anti-Rummer Tavern. Instead of being ruined, it's been enhanced. The interior is still the same classic city pub style with plenty of wood and carpet, but there's a new enthusiastic energy about the place that instantly makes me smile whenever I pop in.
And pop in I do every time I go to Cardiff. Mostly because it's one of the few pubs around with an eponymous, named ale - Blue Bell Ale - which is a hell of a coup and is what first enticed me to visit. Served alongside other Glamorgan classics such as the superb Jemima's Pitchfork, this drop is a marketing manager's dream. 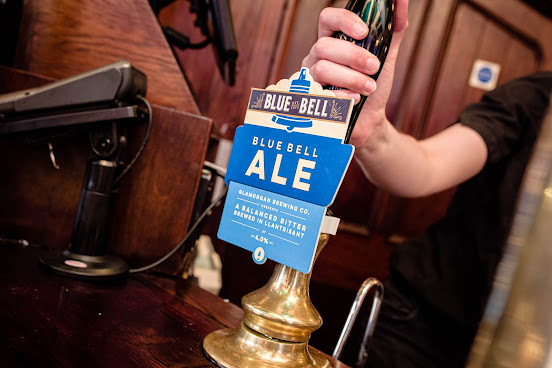 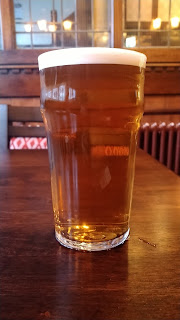 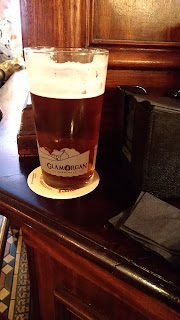 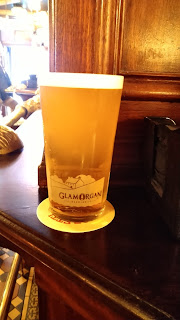 Extra points for nonic glassware
(L-R : Welsh Pale, Blue Bell, Jemima's Pitchfork)
Elsewhere, unusual-for-this-part-of-the-world "craft" beers on keg such as Brixton and Camden complement the usual macro offerings. There's a full pub food menu, and plentiful big screens mean you won't miss any sport, even if like me you choose to be a bar wanker and perch on the end of the beautiful mahogany edifice.
The new owners don't seem to be squandering the chance they've been given to own and operate this classic location. With views of the castle, it helpfully abuts a craft beer bar and is just seconds away from the teriffically tempting triumverate of Womanby Street, Quay Street and Church Street; and is just minutes away from Cardiff Arms Park.