An often asked question in the beer enthusiast community is "what was the beer that started you on this journey?" or "What beer changed your life" or "What was your gateway beer?"
Funnily enough, it was being asked by Andy Parker (@tabamatu on Twitter) on Friday night. All 70-odd replies are worth a browse (once you've finished reading this, obviously!)

Best question ever on a meet the brewer - Which one glass of beer changed your life?
Green Flash West Coast IPA for me - it inspired me to start home brewing.
You? https://t.co/GVJoxmgshZ
— Andy Parker (@tabamatu) January 22, 2021

And the answer is "well it depends." Because when exactly did the journey start? Do we count the first surreptitious shandy at age 12 in a beer garden with your dad? Or that sneaky can of warm Fosters down the park as a teenager?
Let's take a sample size of one. Male, 37, Welsh, slightly overweight and thinks he's a blogger.
Ahem.
My first forays into the world of social alcohol came with RTD concoctions such as Bacardi Breezers, VK Vodka Kick and the odd Smirnoff Ice before a bad experience with some of my mate's home-made screwdrivers put me off vodka, and indeed most spirits, for life.
I went onto a safer and, in my still naiive eyes, cooler option of Budweiser. Never mind that it cost approximately one-and-a-half times as much per millilitre as draught lager, I would happily sup 330ml bottles all night.

Then at university my taste for gassy beer waned and I became a gassy cider drinker - although the cider in question was Strongbow, which was all the more insane considering I was at university in Cornwall.
In my early 20s I discovered Magners and thought pouring cheap flat Irish cider over ice cubes was the height of sophistication.
When I met my other half, we used to go and visit her grandfather whose beer of choice was John Smiths. I had never drunk bitter before - my immediate male family members were all fans of lager - and I was as smitten with this new taste as I was with my new partner. This eventually led to Worthington's and Caffreys, but it wasn't until a holiday to Cornwall in 2008 that I would try Tribute for the first time.
Tribute, the late, great, Roger Ryman's tour de force, was the first of my proper "gateway" beers, crossing the threshold from mass market to "small regional brewer" territory. I was intrigued and suddenly those funny shaped hand-pulled pumps with the big badges on them began to grab my attention. Doom Bar was next to follow, and another week away in Dorset led to Fortyniner and the DSB collection of beers. 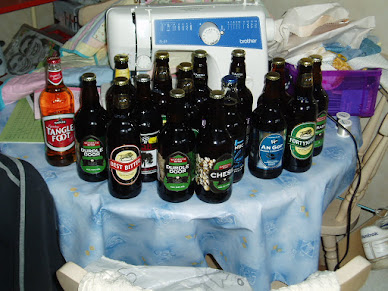 The haul from Weymouth, 2009
I then went to Ireland and fell under the thrall of the black stuff and from then there was no looking back. I would - sometimes foolhardily - choose whatever was on cask in whatever pub I went into, including one notorious time in a now-closed Wetherspoons where, much to the amusement of my keg-safe work collagues, I found myself on the receiving end of the dregs of something called Bonkers Conkers.
I also had misadventures with Badger's Pickled Partridge - to this day one of only two beers I've drain poured - and the Isle of Wight Garlic Farm's Garlic Beer (brewed by Yate's) - to this day one of only two beers I've drain poured
And then something happened when I was least expecting it. In my naivety I thought I was exploring the limits of what beer could offer me by going through supermarket shelves and picking out bottles, or by running the gauntlet of random cask ales.
Until one random sunny May day in 2014, in a small town in Oxfordshire.
My brother and sister in law - whose wedding I attended in Sweden three years later and which provoked another beer story - were living in Faringdon at the time and the whole family had decamped down the M4 from South Wales for a long weekend. My father in law had a new child so on the Sunday we piled into a couple of cars and drove around looking for a quiet suitable pub/restaurant for a bite to eat.
We stumbled upon the Lord Nelson in Wantage, a Hungry Horse pub. The sun was over the yardarm and there wasn't anything inspiring on the cask, so I scanned a drinks menu handily placed on the bar. I settled on something called "Anchor Steam" for no other reason than it was brewed in San Francisco; a city I have a borderline obsession with being a fan of its music, its movies and, more importantly, its baseball team. 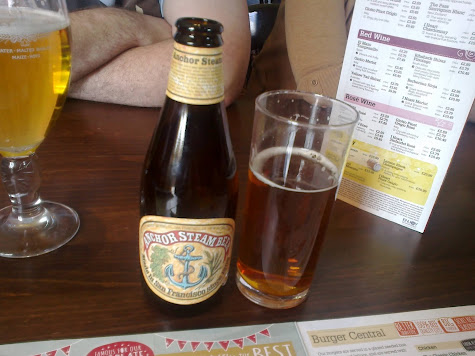 And after a few sips I was hooked. This was different. This wasn't a lager, or a bitter, or an ale. This was different. This was historic and new at the same time. I wanted more. It was a small bottle at a relatively high price. It was like Budweiser all over again, only further west.
This was my gateway beer. This was the reason I turned out to be a beer enthusiast / wanker / nerd.
This was genesis. 2:14pm, Sunday 25th May, 2014.
Anchor Steam was first brewed in 1896 by the Anchor Brewing Company. The "steam" in the name comes from the fact that boiling wort would be pumped to the roof where it would be cooled by the notorious Pacific coastal winds, leaving a cloud of steam around the brewery.
Of course, being in San Francisco, it would be hard to tell the steam from the fog.
Originally a drink for the working classes, Steam beer would survive the clutches of the continually creeping mass-market corporate beer world of the mid-late 20th Century until it eventually fell into Sapporo's hands in 2017.
That was not before it (apparently) inspired a brewery near another surfers' coast closer to home to brew their own "steam" beer. 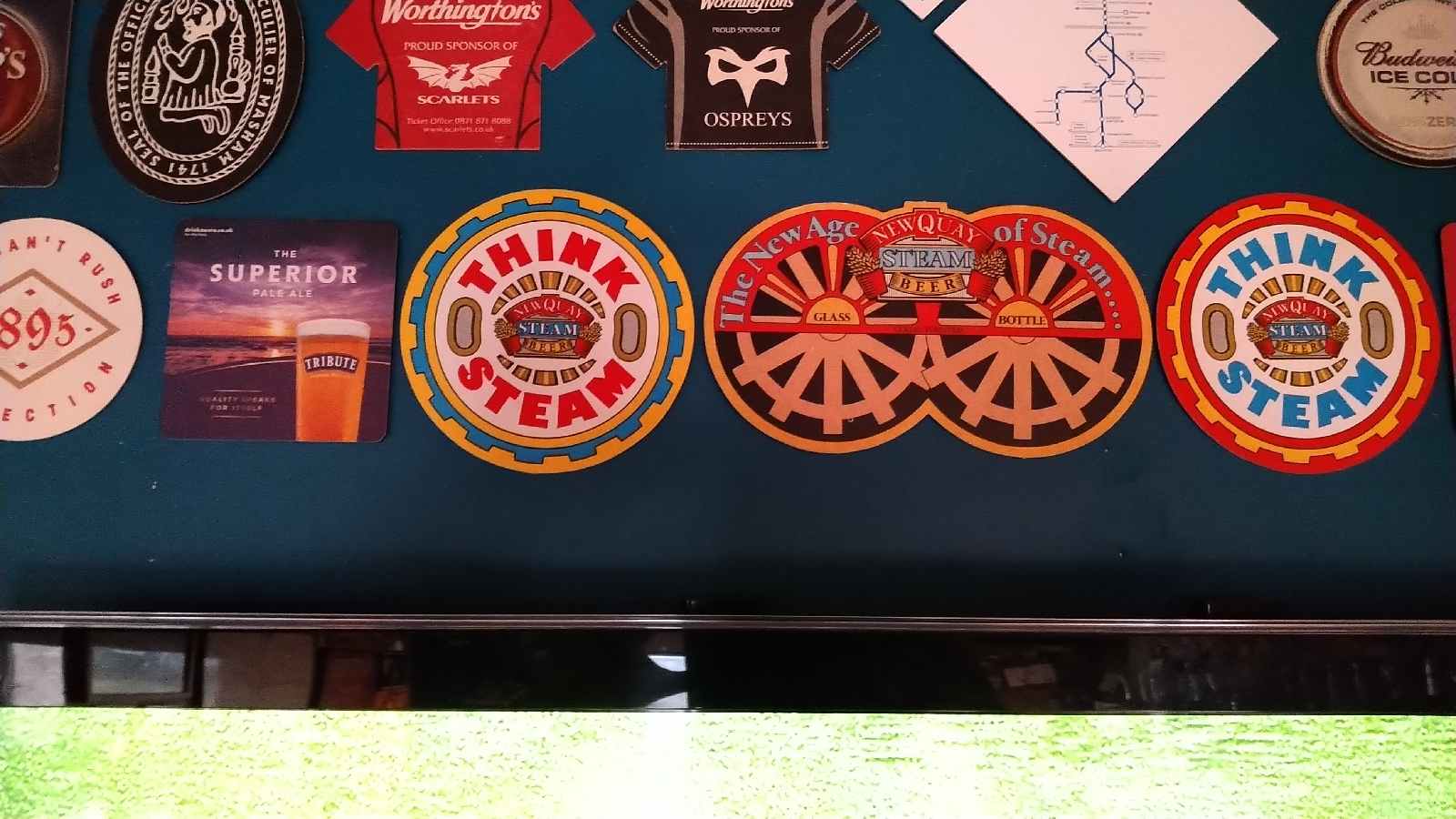 Some Newquay Steam beermats attached to the author's wall
Anchor Steam and its stablemates are now seen as classic, pioneering examples of the craft style and are adored the world over, with the iconic branding and labelling literally being works of art by artist Jim Stitt - the Christmas edition label being a particularly anticipated part of every year's festive tradition. 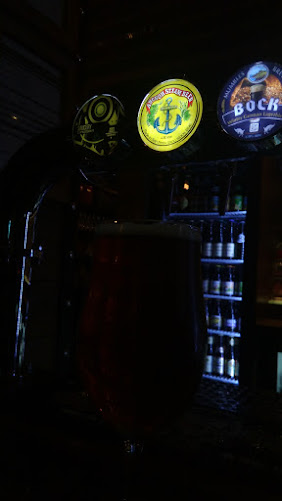 Anchor Steam on sale in Cardiff in a pub named, appropriately, the Head of Steam.
But alas, at the grand old age of 93, Stitt has retired and has handed over responsibility for the Christmas label to a chap called Nathan Yoder. Huge shoes to fill and a storied legacy to maintain and continue. We all live in hope he respects the tradition wisely and thoughtfully.
As for the rest of the range though...well there's been a much more drastic change. 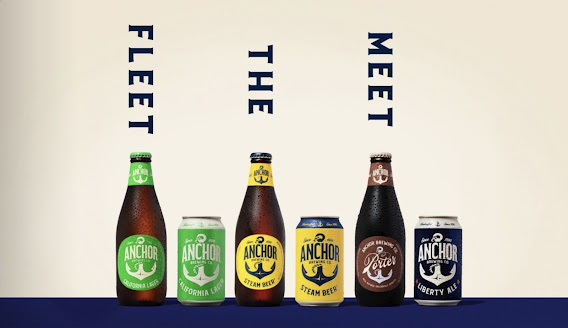 from Chris Martin's Twitter account
Yikes.
Designed, it seems, primarily around an icon which would make a decent social media avatar, this is an uninspiring, bland, anonymous design unbefitting such a storied beer.
Other beer brands - including Budweiser - have managed to retain their vintage brands throughout modernisation processes. This "125th anniversary commemoration" stamps upon and buries nearly all of the story that comes before it.
The plain, inconsistent labelling (Why does the Porter get even a slight semblance of individualism?) resembles a supermarket own-brand and, most disappointingly, merely now seems to fall into the category of just being a sub brand of a big beer conglomerate.
It will blend in with lesser brews, becoming part of the furniture.

Look familiar?
Naturally the news has elicited some emotional responses on social media amongst those who love the beer and the branding. Chris Martin, of Alcohol By Volume, said "Never knew a rebrand could be so unnecessary, so painful and miss the mark by so much. This has zero personality and sucks the soul out of an historic brewery I love so much" while Pete Brown -  who literally wrote the book on beer label art and design - responding with a very reserved "No. No no no no no . Absolutely not. No. I said no."
Others were more defiant.

Niiiiiiiiice.
As rebrands go, it could have been a lot worse however. Kelham Island, in my humble opinion, took a huge step backwards when they ditched their classy, refined logo in favour of something straight off of a 1990s kids Saturday morning TV show 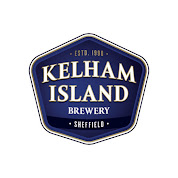 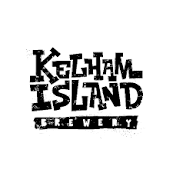 And when BrewDog changed their well-known and recognisable can design to a boring shield, it was met with disbelief and more than a few comparisons to numerous other brewers -  such as Thornbridge - who also utelised a very similar shield motif on their small pack labels. 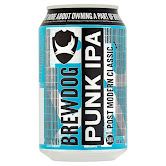 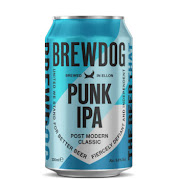 But of course, if BrewDog haven't done it yet, no-one has. That's the rule, isn't it?
The important thing for Anchor Steam fans is that the beers inside the bottles are the same, brewed in the same city that they have been for over 125 years. And while we may bemoan the gradual and ever-present homogenisation of our world - where focus groups, surveys and marketing graduates rule the roost over romance and nostalgia - we must be grateful for small mercies.
Anchor Steam was my golden gate into the world of craft beer. It will always have a special place in my heart, and the memory of that May day in 2014 is as real to me now as it will ever be, and no crap boring label can change that.

Addenda - 28 January
Anchor have put out a statement in reply to all those who expressed concern, dismay, distaste and disappointment with the new branding: 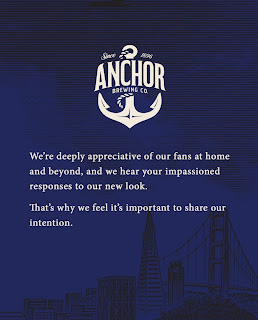 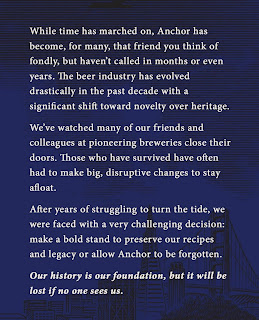 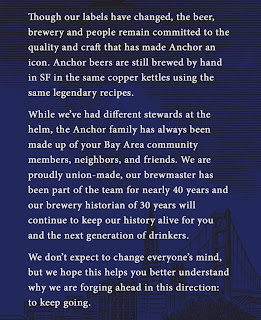