DISCLAIMER
This is going to be a different post to normal - a bit more personal and not with much of a conclusion. I just wanted to share my experiences of trying to manage body weight and fitness whilst being a beer nut and what having beer as your hobby does to your health - both physical and mental.


I've mentioned before how my formative drinking years were marked by consuming safe, sweet, mass market drinks from every point on the spectrum. Back when a 330ml bottle set you back barely £2 at the bar, I ran the gauntlet from Bacardi Breezers through VK Vodka Kicks and eventually Budweiser, Fosters, Carlsberg, eventually "graduating" to Strongbow while at uni. It feels an absolute lifetime away. (In fact it literally is because I am currently twice as old now as I was then.)

This all coincided, unsurprisingly, with my first taste of disposable income and freedom to leave the school campus at lunchtimes. It meant visiting the local garage and chip shop at lunchtime most days. It meant picking up a pizza on the way home. 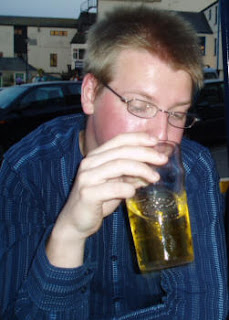 Suddenly, without being conscious of it, I had a weight problem. I didn't have an eating problem per se, my appetite was healthy and varied enough and student finances meant my budget didn't get stretched unnecessarily far.

It's just that temptation, laziness and living alone during my first two years of university meant those little treats at the Spar round the corner from my digs turned into sustenance and safety nets. What's another bag of chips; it's Friday after all.

Oh, and I was working in a supermarket bakery at the time. That didn't help.

I didn't really notice it properly until I left uni and began work and had to start wearing shirts one or two sizes up from normal. I bimbled through post-uni life floating around the higher echelons of 15 and 16 stone with a BMI way in excess of 200. But I didn't feel inclined to do anything about it; I wasn't particularly unhappy, I wasn't ill and pizza, bacon and beer tasted too good. 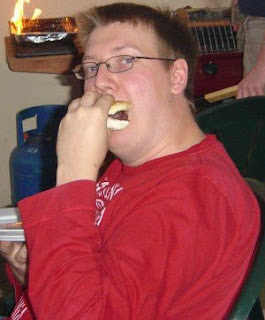 Then it all started to unravel. Quickly.

The initial signs were relatively benign. I realised one day I couldn't fit into size XL clothes. In fact a size XXXL rugby shirt I quite fancied buying in the end of year sales was so tight I struggled to unroll it off me in the fitting room of Rugby World. (Yes I know they're form fitting these days but this was ridiculous.) A beautiful £10 pair of black jeans with yellow stitching - the colours of Cornwall - had to be left behind in M&S Outlet Swindon.

Then suddenly one weekend I ended up in hospital and was forced to take time off work with biliary colic; a short stabbing pain in the abdomen caused by the inital stages of gallstone development.

Then I was ridiculed by an old acquaintance for the size of my manboobs, even though at the time out of desperation I was attempting to hide them under a form-fitting body shaping t-shirt from JML.

So enough was enough. I swallowed my pride, and my last slice of pizza, and went on a proper, involved, active diet, aided by MyFitnessPal and an exercise bike. I started it the day David Bowie died on January 10th 2016 and ended it 150 days later, having lost 3 stone exactly. For those wondering it wasn't a fad diet or a crash diet, I did it purely by abstaining from unnecessary treats, chocolate, swapping sugar for sweetener, ensuring I ate breakfast, spending time on the exercise bike, walking instead of bussing or taxiing, cutting down on white bread, and the ultimate sacrifice: I went totally sober for the whole shebang.

See, part of the reason for my gluttony was alcohol. Apart from the bloating, sugary effects of beer itself, it also loosened my inhibitions so much that food on the way home from the pub became a regular routine rather than an odd occurrence. All-night petrol stations and corner shops meant I didn't have to leave the pub until stoptap and could still get my unfettered munchies-motivated faceful of sausage rolls, crisps, chocolate and sugary drinks. The kebab shop pizza on a Friday became a tradition not a treat.

But being sober and focussed meant all of that temptation almost disappeared overnight. It's amazing how a successful period of dieting rewires your brain. Now when I look at a fatty or sugary item, I don't see how nice or tasty it is, I see what I looked like and how I felt like - physically and mentally - when I was bigger.

So how do I maintain it in this exciting modern crafty world of FOMO, lactose, dirty fries, burgers and pizzas? Well,with difficulty. When I set off on a road trip to Sweden in September last year I was 13st5. Exactly one year later for one reason or another I had slipped back to just peeking over the wall of 15st again. I took up walking in April and got back to 13st13lbs briefly but that was temporary. It's taken a good few weeks but as I type this I'm back down at 14st 4lbs. I've lost my Copenhagen Holiday weight from June, now I need to lose my Six Nations weight and my Christmas 2018 weight.

As always, weight seems to go on in a blink of an eye and comes off blinkin slowly. Despite careful calorie counting and going for double-digit-mile walks, whatever I lose in the working week has a nasty habit of jumping back on as soon as I have a few light ales of a Saturday afternoon. And while the bloat dissipates quickly, the damage remains for longer and suddenly that 13-mile 3 hour walk you polished off with pride the previous Sunday has been wiped out by one too many imperial stouts. It's disheartening, disillusioning and makes you question at what point do you have to choose between your passion and your health?

Well, it can be done. It's trite but moderation is the name of the game. It's about fighting the FOMO and telling yourself that that beer you *really* *desperately* have to try before it disappears from your local brewery tap forever.....will be around again one day. Or something incredibly similar will. It's about realising that you actually are allowed to have the odd weekend at home with a few bottles or cans. It's about realising that you have to pay for everything you put into your mouth, and you can offset that payment by putting some trainers on your feet, some earphones in your ear and seeing how far down the canal you can go before the F1 starts.

Incidentally a typical beer will cost you anything between 200 and 400 calories per pint. You burn 100 calories in a 15-minute mile walk. So it's much easier to do a long walk if you class it not by miles covered, steps stepped or time elapsed. I count it by beers. Makes it so much easier.

Going sober is easy now there's so much non-alcoholic beer around, although I tend to avoid pubs in general on those months because that's always when your favourite beers are on tap. I resolve to have two sober months a year. This year they will have been April and November; usually they are January and October but rugby and holidays dictated the calendar this year. I usually find them useful for my body to regenerate and my bank balance to settle. But it also is prime opportunity for my waistline to stabilise and for the belt to be fastened an extra notch along.

So that's it really. Like I say, no big conclusion. I'm doing my best for my own health for my own sanity and my hobby must fit into that somewhere if I want to be happy in myself. If there's anyone else out there thinking or feeling the same thing, don't be disheartened. You don't need to sacrifice your love of beer or your health - it's not a polar binary choice. You can manage one to help the other. Just realise that there's a million and one beers out there and you can't try them all. You only get one body.