Good things come to those who....

Like most people on Beer Twitter on Wednesday afternoon, I found myself blown away by the beautifully written and personally illustrated tribute to the legendary beer Harvey's Sussex Best penned by beer writer extraordinaire Matthew Curtis for Pellicle.

And, once the jealous talent envy rages had settled, I began to ponder as I stared out of my office window into the dank greyness of Swindon. What beer could I write about with such fondness? And moreover, which beer could I do justice to within the limited scope and capabilities of this blog?

There are many candidates. Ringwood Fortyniner, my all-time favourite bottled beer which, along with St Austell Tribute and Badger Hopping Hare, have for years formed a tremendous tried and tested triumvirate of good sessiony beers for my personal home consumption.

There's any number of good craft and independent beers I could wax lyrical about but with which I don't have a deep personal relationship like Stay Puft from Tiny Rebel, or Felinfoel Double Dragon. There are the one-offs which I will never see again which made such an impact upon me such as Left Handed Giant's How To Rejoice or Northern Monk's Salted Caramel Star porter.

There's even the less celebrated and less salubrious entry-level beers that started me on this adventure all the way back in my formative years. There's Budweiser which formed a very neutral, very consumable and slightly more socially acceptable drink than Bacardi Breezer with which to bridge my sixth-form and university lives. There's John Smith's, Worthington's and the almost forgotten Caffreys which were a similarly neutral and accessible path into the world of bitters and ales, a path made possible by my other half's late grandfather who insisted on sharing his stash of John Smith's with me whenever we'd visit.

But for me, despite Anheuser Busch's marketing, there is only one true king of beers. One that I will always rank higher than even the finest, bestest, most tastiest beer of the lot. And I am well aware that by revering this drink, I am putting myself at odds with a lot of the values I claim to espouse; yet at the same time placing this drink on a pedestal is entirely in sync with my belief that quality, subjectivity and individuality rules. 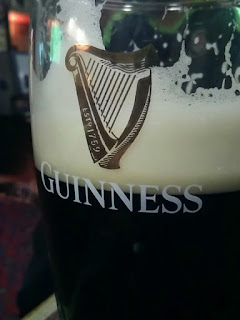 I can still remember my first Guinness. Or should I say, Guinnesses, plural, if that is the correct way of pluralising a brand ending in S. It was St Patrick's Day, 2009. I was walking through one of the rougher parts of my fine city on my way home from work when I had a thought. It's St Patrick's Day, I should really have a Guinness to commemorate the occasion. This is how my mind works, and I use the word works quite loosely.

I popped into a nondescript independent corner shop and scanned the shelf. My naiive pre-beer-tragic-wanker brain saw the famous black and white logo stamped on the side of a fourpack of cans. It was a reasonable price, so I paid up and left.

What I didn't realise at that time was that I had picked up Guinness Original, which is the harsher, more acquired taste of Guinness which, let's face it, is already a love-it/hate-it product in a similar way to Marmite (which I also love, btw.) I struggled through the first can, didn't finish the second and I don't quite remember what happened to the third and fourth. We moved out of the flat soon after that so I may have left them behind as a surprise for the next tenants.

Well if that was Guinness I thought, they can keep it. How can people quaff that shit like water and enjoy it? They must have tastebuds of iron. (Well, they would do, drinking Guinness.)

And so I left Guinness behind and blundered on through the world of best bitter and golden ale until we happened to visit Ireland one summer and, being tourists, went to the Guinness Storehouse; obstensibly for the tour and the merch but also because deep down inside me there was this nagging feeling that I should give Guinness one more go; whether as a sap to my sense of male pride or whether some mystical Celtic force was guiding me back onto the right path.

I find myself on the top floor, like we all do, staring in wonder out of the window at the beauty and scale of Dublin. In my hand, procured in exchange for an entry token, a freshly poured immaculate direct-from-the-source pint of Guinness Draught - the creamier, smoother, gentler but still distinct cousin of the tinned torture I had endured a few years earlier.

Nervously I sipped. And it was a revelation. Suddenly it all made sense. Suddenly I knew why people quaffed this stuff like water and enjoyed it. Because suddenly, I was hooked.

Barely 24 hours later we were in Tipperary on our way back from Cork. It was approaching 6pm on Arthur's Day and we were hungry and thirsty. We knew there would be an Emerald Isle- and indeed world-wide toast to Arthur Guinness at 17:59 and wanted to be part of it. We found a pub where there was a huge barrel plonked right in the middle of the room with a tap sticking out of the top of it. We duly ordered a Guinness and a red lemonade, and, after fiddling with our Euros and clarifying we were Welsh and not English, to my surprise the bartender - in every way your stereotypical Irish bartender which only leant wonder and majesty to the occasion - handed me an empty tulip glass.

"If you can pour a perfect pint of Guinness me lad" he chuntered, "ye can have it fer free."

I didn't know if this was an Arthur's Day thing or a regular occurrence, especially Tipperary's touristy tendancies. But I didn't have long to ponder the possibilities because suddenly there was pressure on. The band on stage (of course there was a live band on stage in an Irish pub) had stopped playing, it was 17:55. By my calculations I had the requisite 119.5 seconds and a heap load of change to spare before we all toasted Arthur. My head was also trying desperately to remember the technique, knowledge gathered from a lifetime of watching the "Dancing Man" advert and from watching and listening to the hosts and hostesses at the Guinness Storehouse barely 24 hours previously.

45 degree angle. Check. My palms were sweaty, knees weak, arms heavy as I gripped the font, gently pulling it open and, surprisingly, Guinness did come out. Oh boy. No turning back now. A smattering of locals sat at the bar were watching, grinning gently as they observed what must have been a regular occurrence - the cocksure foreign tourist coming to their fair isle to cack-handedly ravage a culturally significant phenomenon.

Logo. Logo. Logo. That one word kept repeating in my head as I watched the surging liquid rise up the side of the glass. Except I couldn't see it. Where was it? Oh feck (I'd picked up the local lingo you see) it was under my thumb. Could I rotate the glass round at this stage? I gently wiggled my hand and suddenly a harp appeared. And then disappeared. I snapped the font off sharply and placed the glass on the barrel top, breathing heavily.

I daren't look around. The other half found this all very amusing, sipping her red lemonade on the bar. I felt a dozen pairs of Irish eyes smiling but burning into my neck. I glanced down at the glass. It looked very lively. Too lively. A head was forming already but the surge was still going. Oh god, this is going to be a huge head isn't it? Over an inch of foam. Oh god. Good job I still have that €10 note in my back pocket. I might need it shortly.

Then that magical thing that Guinness does happened. The surge just sort of disappeared and the head shrank back while still remaining snow-smooth and silk like. I was too busy worrying to be counting 1-100 2-100 3-100 in my head and didn't have the mental capacity to count up to 119-100. Still, this felt long enough. Truth be told, it felt like two days had passed when in fact it was barely two minutes.

Now - tap in the foam and push *forward*. And don't try to draw a shamrock. That really is wanky.

Finally it was over and the black white border was just straddling the harp logo. I turned around and faced the firing squad.

"Not bad son. 8 out of 10. Happy Arthur's Day." And with that he turned around and resumed drying the other glassware.

Relief and pride swept over me instantly. And then suddenly it really was 17:59, the band shouted "TO ARTHUR" and my newly created pint of 80%-quality black gold was thrust into the air.

Oh, and just for extra measure, I acquired a Guinness home surger kit so I could have pub-quality Guinness in my home!

As for Guinness snobbery - i.e. seeking out the perfect pint of the stuff away from Dublin - yes I have fallen victim to that slightly but it's no different from knowing which pubs look after their cask ale. I have found a venue in Cardiff - the Flute & Tankard -  which serves 99% quality Guinness. Also I have found the quality in my local Wetherspoons to be above average.

And becoming a Guinness lover has led me on to many other stouts such as Brains Black, St Austell Mena Dhu and many more which I may not have sampled had I not given Guinness a second chance.

So that's my love letter to Guinness. A constant in my beer life which I hope will never go away, and a drink which I try to have at least once on any given beery day out. Long may it reign as, in my opinion, the one true king of beer.

I have a vivid memory of the coffeish bitterness of my first pint of Draught Guinness, as a teenager in a pub in the late 80s. When I finally made it to Dublin in the late 90s, I thought the Guinness there was better, with a slighlty tarter taste, but on more recent trips I've found it to be much the same as here. The only thing that really puts me off drinking it in pubs now is the Extra Cold variant, which to me completely robs it of its flavour. My favourite Guinness now is the bottled Foreign Extra/Special Export, which is closer I think to the original bottled-conditioned Extra Stout, which I found a bit thin the last time I tried it (as I did the Dublin Porter they brought out a few years ago).